I have a confession to make. At the end of last year, Facebook and I fell out. I had important stuff to focus on in life, and all Facebook ever did was annoy me with pictures of people’s dinner, moaning statuses (is there a plural for status?) and non-stop motivational quotes.

Not only that, but I sometimes think Facebook is a bit of a shit-stirrer. It can be that bitchy one in a friendship group that goes ‘did you know she is doing this?’ Or ‘so-in-so said this about that.’ Sometimes you can know a bit too much about people.

So I deactivated my account. It took a little while to break the habit of updating your feed each time I sat down for a coffee, but overall I didn’t miss it much.

I missed seeing the nice pictures of family and friends and finding out news, but honestly, probably all it did was to make me actually talk to people who mattered in my life. Shocker.

What did shock me was the reaction I got. Friends realised very quickly that I had removed myself. I’d had to set up a blank account in order to be able to access the pages I deal with at work. Because I had to befriend my old profile to do this, I came up in ‘people you may know’ feeds. It was like I had turned up on their doorstep to tell them that I hated their guts. I had deactivated my account, but to some, this was personal.

Anyway, Facebook and I remained distant until recently when I started up my page for this blog and wanted to use my ‘real’ account in order to keep work and personal separate. I didn’t look at it very often at all and remained aloof and cool regarding the pesky news feed and I still haven’t posted a status.

But then something wonderful happened that made me realise that I had been missing the point of my friendship with Facebook. I had a message in my ‘others’ folder. (Seriously FB – we need a chat about that folder. Just why?) It was from a girl who I had never heard of and simply said ‘Long shot, but did you own a horse called Jake in 2008?)

I cannot tell you just how electric that jolt of excitement was when I read that without a quick bit of background.

My old horse, Ben, was diagnosed with severe ringbone in 2007 and such was the acuteness of the disease that I was led to believe we didn’t have much longer with him. I was devastated. He was retired immediately, and I decided that if I didn’t get another horse before Ben passed, I never would.

Then came a chance meeting with Jake – a gorgeous ex-racehorse – 16.2hh with a wonky white stripe, dopey eyes and the most docile nature. And I was in love. Nothing would ever replace Ben – he was my first horse, but Jake was perfect for going forward. 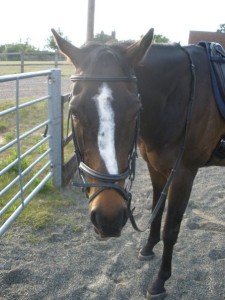 So I bought him. Ben is still alive now, turning an already expensive hobby into something unmanageable. Jake made my dreams come true. We won the local dressage league, we qualified and came 7th in the regional dressage championships, and he and I taught each other so much and had such fun together. 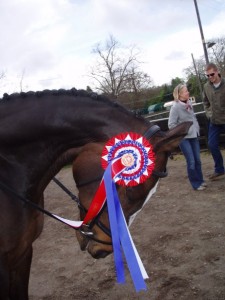 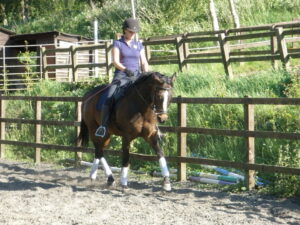 Fast forward two years to finally becoming a grown-up (not before time at 26 years old) and the time came to buy my first property. Simply not manageable with the outgoings I had, so something had to give.

Something was Jake and I was heartbroken. I will never forget loading him onto the trailer of the lovely lady who bought him and just sobbing my heart out.

Fast forward again about 4 months, and I realised I hadn’t heard from the ‘lovely’ new owner. Some instinct told me to look on horse selling site Horsemart and there was my Jake. Up for sale. Frenzied phone calls found out that the woman’s husband had been made redundant and she could no longer afford him either. She had sold him to a dressage trainer, who said he was his next project horse, but turned out to be a dealer.

I can’t explain the feeling. I was so so sad for Jake to be passed on again. I felt guilty that I didn’t find him the right home, I was angry that she hadn’t called me. But ultimately, he wasn’t my horse any more and I had to let go. My now husband offered to go and buy him back for me when he saw my distress, but in my heart I knew I needed to move on.

And I did. But I have never stopped worrying about him, wondering, hoping. And that guilt never disappeared.

So that’s where the bolt of excitement came in. After a short exchange, it turns out that Jakey has found his ‘forever home’. The lady bought him about two months ago. She is out nearly every weekend with him, jumping, showing, eventing and loving him (there have been a fair few red ribbons already).

She has contacted all of his old owners through the details on his passport and is more than happy for us to visit. I cannot wait. It makes my heart sing that he has found such a lovely new mum.

And so I realised. I realised that FB is actually a network. It’s a directory where people can find you to tell you wonderful news, happy things and reunite you with what you thought you had lost forever. It’s a super way to keep in touch if you can’t physically reach people, and you don’t need to be on there 24/7 to find those great benefits.

So FB and I are back together. Just in case there is anything else it wants to link me up with and any other wonderful news it may want to tell me. But I won’t be posting pictures of my dinner.