As you may have read earlier this week, my mum suffers from Parkinson’s Disease. Before she was diagnosed, I think I can probably speak for all of our family in saying we didn’t know an awful lot about how this disease affected people.

Most of us know it can cause a tremor, but beyond that, I certainly had no idea of the symptoms. And with mum’s diagnosis came a need to find out more, so that I was prepared for what we were dealing with.

It seems though, that everyone’s symptoms are different and I will talk about how my mum has been affected in another post. 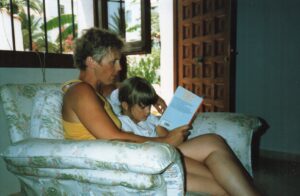 My lovely mum and I when I was a little girl

But I think the point here is, not many people are aware of Parkinson’s and would find it difficult to recognise a sufferer. I was, as I mentioned, exactly the same until confronted with it, so I am in no way criticising this.

What I am criticising though, is people’s impatience and intolerance of others around them, not just those with Parkinson’s Disease, but everyone who is less able, or slower, or older, or needs to be shown some kindness in life.

I recently read a post on the Mumsnet forum and as I read the comments from young and middle aged women, I became more and more furious. ‘Am I being unreasonable?’ they asked. ‘Yes you bloody are’, I wanted to scream.

The thread is about people taking too long to pack their shopping and put their change in their purse at the supermarket checkout.

I am sure we are all in a rush a lot of the time and yes, I understand that things holding us up can be frustrating, but seriously, have we got to a stage in life where we can’t extend a little compassion and kindness?

My mum struggles to get change out of her purse and is so embarrassed of what people will think of her, that she often will pay with a note or card just so as not to hold people up or draw attention to herself, ending up with a ton weight of change in her purse. But even then she sometimes struggles to get her card in the machine or to type out her PIN properly.

To have people tutting and sighing behind her in the queue is appalling. If you are in such a rush, leave a little earlier. Move to a different queue, or just do your shopping later.

Would it kill you to wait patiently?

Or better still to offer a helping hand?

Or even make small talk, just to put that person at ease a bit?

Try and look at that person and imagine how you would feel if it was your mum, dad, or friend, before making a nasty comment.

Another difficulty my mum often suffers from, is tripping and falling. She says she feels as though her brain tells her body to move but sometimes it doesn’t react quickly enough and she loses balance and falls.

She has had many falls over the years and each one physically makes my heart hurt. She has tripped out of the back doorstep face first onto paving stones, up the stairs smashing her face on the banister and many other horrible instances. She has been lucky never to do serious damage, but due to the stiffness, she is often left in an awful lot of pain.

But I think the one that hurt her the most was when she fell over outside the doctors in her local town.

She didn’t break any bones.

But five people walked past her before someone rushed over to help. Five!

How. Just how could you live with yourself if you walk on past someone who is clearly in distress like that, without even a backward glance?

It hurt my mum’s pride.

It hurt her dignity.

And it dented her confidence to go out on her own in the future for months afterwards.

I hope wherever those people were going that they were in such a rush to get to, was worth it.

I hope one day they fall over and suffer the indignity that my mum had to.

Our treatment of others within our own communities disgusts me. How did we get to this stage? Are we really so busy that we cannot help others any more?

What hurts the most is that my mum is one of the kindest people you would ever have the pleasure to meet. Always caring for others, always offering a helping hand to strangers, family, friends and never to busy to have time for others.

Surely she deserves a little kindness in return? Surely everyone does.

It’s Parkinson’s Awareness Week this week and the charity has really hit the nail on the head with its Up Your Friendly campaign.

Their recent survey of 2.000 people with Parkinson’s has found that over half have experienced rudeness or hostility from the public. One in five of those would rather skip a meal than venture out to the shops to buy food. One in six feels trapped in their own home due to the treatment they have received in public.

Is this the world we want to create for others?

I urge you to stop and think next time you are rushing and someone is a little slow in front of you.

I urge you to show some care if you see someone in distress. Even if you are late – it takes two minutes to make a call for help.

I urge you to Up Your Friendly.

One day, it may be you or one of your loved ones who needs some help.