I didn’t write a round-up post for the year. It’s the sort of thing I would usually love to do, but this year, I didn’t want to look back.

So bear with me as I reminisce a bit. 2016 bought with it wonderful and awful news in fairly large quantities and, having decided to take a bit of a breather and actively try to slow down a bit before baby number two arrives, as well as a lull in a big journey over the last six months, I wanted to take a moment to reflect.

We’re scooting back to Father’s Day, Mr M’s first, and one of the happiest days of the year spent with our little family of three in the morning, then onto lunch with my dad and other family for lunch and time together in the afternoon. I remember the day clearly, as looking back, it felt a bit like the last lovely day we were likely to get for a while. 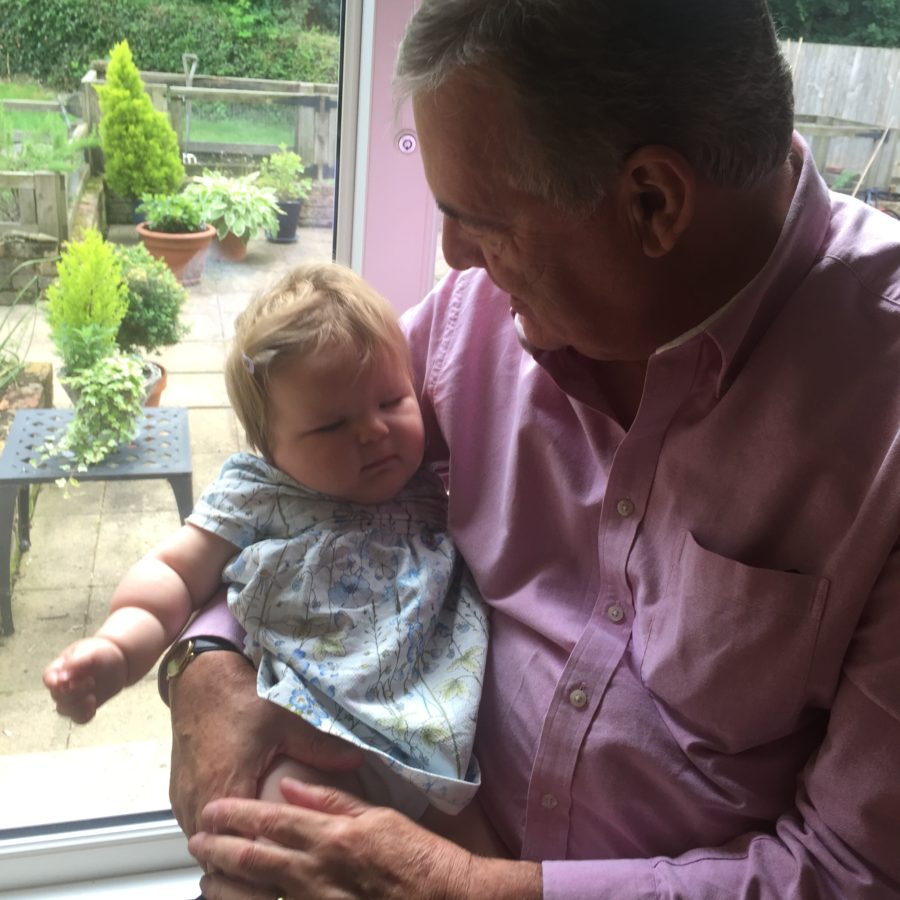 My dad had been unwell over the previous month, and the following morning – June 20th – I got up early to go and pick him up to have a few routine investigative procedures done at our local hospital. Another day that I remember like it was yesterday. I went over to pick him up, while Mr M got Lottie up and gave her a bottle and I swung past and picked up a very dopey little girl on my way back to the hospital.

I dropped dad off and once he had gone in, I was advised to go home. They would call me half an hour before he was ready to be released, which was plenty of time to get back.

Once I’d got home in the pouring rain and started giving Lottie her weetabix, my phone rang. An anxious-sounding woman was asking where I was and telling me I needed to come back to the hospital quickly.

Panic rose up inside me.

If I’m honest, I’d felt uneasy about dad’s illness from the beginning. There were no huge warning signs, other than it wasn’t responding to medication. I was trying to remain positive, but had told Mr M on more than one occasion that I wouldn’t be surprised if they told us dad was seriously ill. Being an eternal optimist and never worrying until necessary, Mr M had shrugged off my comments and told me to wait and see.

I just had a horrible horrible feeling that something wasn’t right.

As I discarded Lottie’s cereal and raced back to the hospital, all sorts of scenarios were going through my head. They’d told me that dad needed to be admitted. That I needed to speak with the consultant before he went in.

After what seemed like an eternity, my sister turned up, quickly followed by Mr M, who hadn’t been asked, but who realised immediately that he needed to take Lottie home for me. I’ll always be grateful for that as I didn’t want her to witness that panic and negativity at just ten months-old.

Finally we saw the consultant, who told us that dad’s earlier scans had shown something, possibly a mass, was stopping his kidneys from functioning properly. And while the whole team was there, he wanted to take dad into theatre to find out what was going on.

He was a nice man. Strong. Capable. And he eased my fears a little.

A brief visit to dad’s waiting bay where he told us he would rather it this way. He would rather get it out of the way and know what was going on than have to wait for another appointment.

I’ll never remove that image from my head. Dad was in an operating gown and compression stockings, sitting on a chair on his own with his bag next to him.

And despite the brave smile on his lips, he looked bloody scared.

And so began one of the longest waits I’ve ever experienced. We didn’t tell my mum immediately. Stress worsens her Parkinson’s and she hadn’t been too well either, so we didn’t want her sitting at home fretting. We told my brother, who tried to reassure us that it would be something like kidney stones.

Six hours later, we went to go and get mum and tell her. On the way back to hers, I had a call from the recovery nurse who said dad was awake and stable.

Telling mum is a bit of a blur. Odd, as everything else remains in my memory as clear as a bell.

Finally, at 5pm, 11 hours after I’d picked him up to start this journey, we managed to see dad again. He was in a lot of pain, rather disorientated but as cheerful as he could be. A trait which he maintained throughout most of the next six months and which I will always be amazed at. I managed to speak to a nurse who could only tell me that a large mass had been removed.

We returned that evening and dad was none the wiser as to what had happened that day. Over the next week, it turned out (slowly) that the urologist had removed two large tumours from dad’s bladder, which had been sent off for testing.

Dad came home on the Friday for another two week wait and recovery. He had recounted a story of the man in the opposite bay having his planned surgery delayed that Monday morning because ‘some poor sod’ had been rushed in for a four-hour emergency procedure. He had no idea that was him. But the more people he spoke to, as the week went on, the more we all started to fear the worst.

Fast forward then to Monday July 2nd. A positive pregnancy test. Talk about timing. I’d taken it to remove the late period from my list of things to worry about. In hindsight, I wish I’d waited a week as it would have been easier to deal with when we knew what was going on elsewhere.

And then the Thursday. My brother and I stayed at home while the rest of the family went to get dad’s results at 4pm. A long long day following no sleep for me, so I can’t imagine how dad must have felt that day.

We had gone to walk the dogs to keep busy while we waited for them to come back. Small talk. Inane conversation. Occasional touches on the subject at the forefront of all of our minds. Before shying away again onto safer turf.

As we neared the house, my sister called. They were back.

We came through the back gate to see dad sitting at the table with his back to us. A pint in front of him. A good sign?

The room was quiet. Intensely quiet.

Conversation was calm, measured and almost emotionless. I think everyone was desperately trying to keep it together. While reeling from shock.

I’d feared it would be bad. We all had. But the shock and fear was immense. Overwhelming. Suffocating.

He spoke of chemotherapy. Of surgery to remove his bladder. Of this being potentially fatal. Of his relief. Relief to know what was going on and what would happen and not to have to wait in limbo any longer. I remember thinking what a strange thing that was to feel, but I kind of get it now.

I wanted to run away.

I didn’t want to be calm any more.

But with the strongest man I’ve ever seen sitting in front of me doing just that, we all followed his lead. We had to.

Until he told us he wanted some time with mum and we all went home.