Lottie is now six weeks old *sobs* and we have pretty much found our groove with caring for her and meeting her needs. We are really lucky in that she is a very content baby on the whole now, but there have been some newborn essentials – products that we could not have survived the last month and a half without. 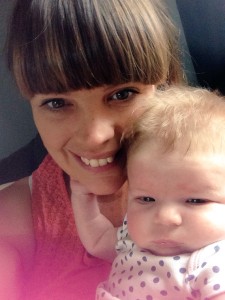 So far, Lottie hasn’t suffered from any nappy rash or sore bottom at all and I’m pretty sure that is because we cover her bottom in Sudocrem Care and Protect cream every time we change her.

My mum used Sudocrem on me, and anything that is still being sold after 33 years (or probably more) is clearly working well for babies. But the old Sudocrem was thick and sticky and really got under your nails and wasn’t easy to apply. The new Care and Protect version is much lighter, glides on easily and seems to soak in a bit better. The handy tube is also easier to use and probably much more hygienic that the tubs of old.

Not only does this treat nappy rash, but it prevents it from happening in the first place, and it’s hypoallergenic, so gentle on Lottie’s delicate skin. At around £6.99 for a 100g tube, it’s not the cheapest option, but one tube has lasted the full six weeks and I’ll definitely be investing in it again. 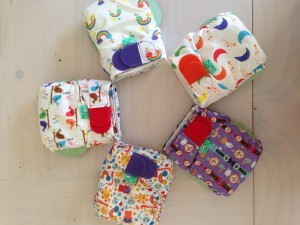 These cloth nappies are so cute! We have five in various designs including Hickory Dickory, Incy Wincy, Tweet, Twinkle and Treasure. I have some larger cloth nappies and they are just too bulky for Lottie’s little bottom at the moment, but the Teenyfits fit perfectly.

I would really like to use cloth as much as possible while she is in nappies for a myriad of reasons – the environment, the cost saving, the fact they are softer on her skin etc. 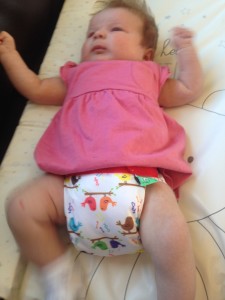 Teenyfits wash really well and come up like new, they are easy to use and fit really nicely. They have a soft and absobent binky core and a one piece design, meaning that they go on like a disposable nappy. Even Mr M can use them. They also dry really quickly, which is a bonus with all of the washing you have with a newborn. 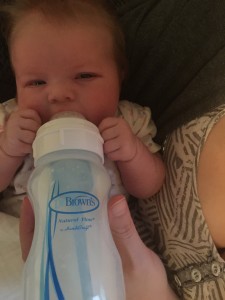 In the first few weeks, Lottie suffered really badly with colic, she would scream and cry all evening and into the night and was in such distress, it was awful.

We noticed that she was taking in a lot of air while she was feeding as she was really gulping her milk, so I looked into ways to stop this and found out about Dr Brown’s bottles. They have a unique anti-colic system and are fully vented and vacuum free.

Immediately on using these, Lottie calmed down with her feeding and was much less windy and within 24 hours, the colic was vastly improved. She was easier to burp and generally much happier in herself. She wasn’t gulping when feeding and it took her much longer to take the reed. I would not use any other bottles now and Lottie is not suffering from colic at all any more, thank goodness. 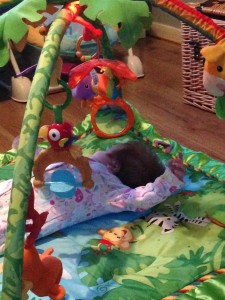 We were given a hand-me-down playmat and for the first few weeks, it remained in a cupboard without a second thought. As Lottie became more aware of her surroundings though, my sister suggested that she might like to use the mat.

She was wrong. Lottie didn’t like it. She LOVED it.

We use this every day and she just loves to watch the various bits hanging from it, the lights and listen to the music. She will spend up to half an hour on it at a time and gets super ex cited on there. She does get a bit cross that the baby in the mirror won’t chat to her though and quite often shouts at herself.

For the first week or so, we could not keep a sock on Lottie’s tiny feet. Then someone bought us some Sock-ons. Problem solved. Genius invention.

I wasn’t able to breast feed, but I did express for the first five weeks, and as a result got really sore, cracked and bleeding nipples. Another one of those delights that nobody tells you about pre-pregnancy! The Lanacare Breast Cream literally cleared this up overnight. It costs £11 for a tube, which seems a lot, but honestly, it is like a wonder cream.

Lottie adores her Maxi Cosi Pebble car seat. If I put her in it when she is due for a  nap and we go out, she will stay asleep for ages. But she is not a fan of being moved once she is asleep.

So I bought some adapters for her iCandy Peach 3 pram, which allow me to click the car seat into it. I do realise you shouldn’t leave a baby in a car seat for too long periods, but these have been fab if I am just popping into the supermarket or feeding the horse and will be putting her straight back in the car.

Bathtime is a big hit in the R-M household. For Lottie. If I’m honest though, it makes me a bit anxious while she is so little. Mr M and I always bath her together as I think we are both a bit nervous. My mum bought us a folding bath sling, which has been invaluable. It gives her that little bit of support and keeps her head above the water level, which in turn puts my mind at rest a little. At least if she were to slip, there is back-up there.

What products could you not have lived without with a newborn?