If you follow me on social media, you’ll know I’ve been campaigning for a new member of the family recently. At first mention, Gary was wholeheartedly against the idea. When I first floated the idea, it was met with a simple ‘no’. And he changed the subject immediately.

And if you look at it logically, he is quite right. We have our hands and time well and truly full with our two gorgeous girls, a full-time job for him, part-time job for me, the house, family, etc etc. We also don’t have a great deal of spare cash to invest on a new family member. So all in all, he was right.

But I believe there are times when your heart needs to rule your head. 99 per cent of the time, I’m all for being sensible  But occasionally, I go with what I want, rather than what’s sensible.

I also really don’t like to be told no. Especially without a conversation and discussion about things. And usually if I get my heart set on something, I’m a bit like a dog with a bone. I won’t let it drop until I am at least persuaded otherwise, or usually until I get what I want.

As such, I’d like to introduce you to our very own dog with a bone, Woody. 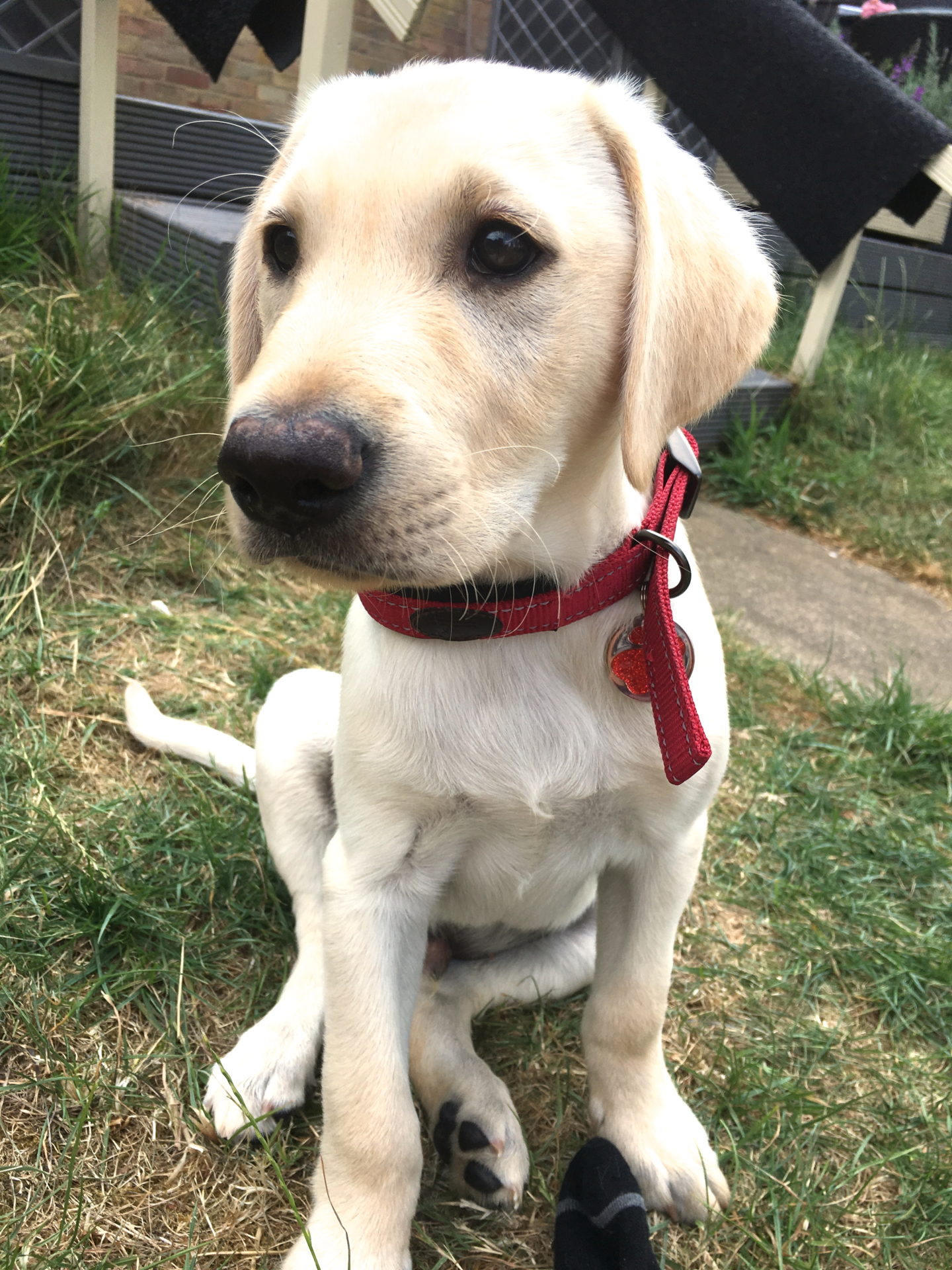 Woody joined our family last Wednesday and I cannot tell you how much I adore this little puppy already. He is calm and chilled, especially with the girls. He rarely jumps up or bites. He’s a soppy, soft, gorgeous little creature. And best of all, our little girls absolutely adore him. 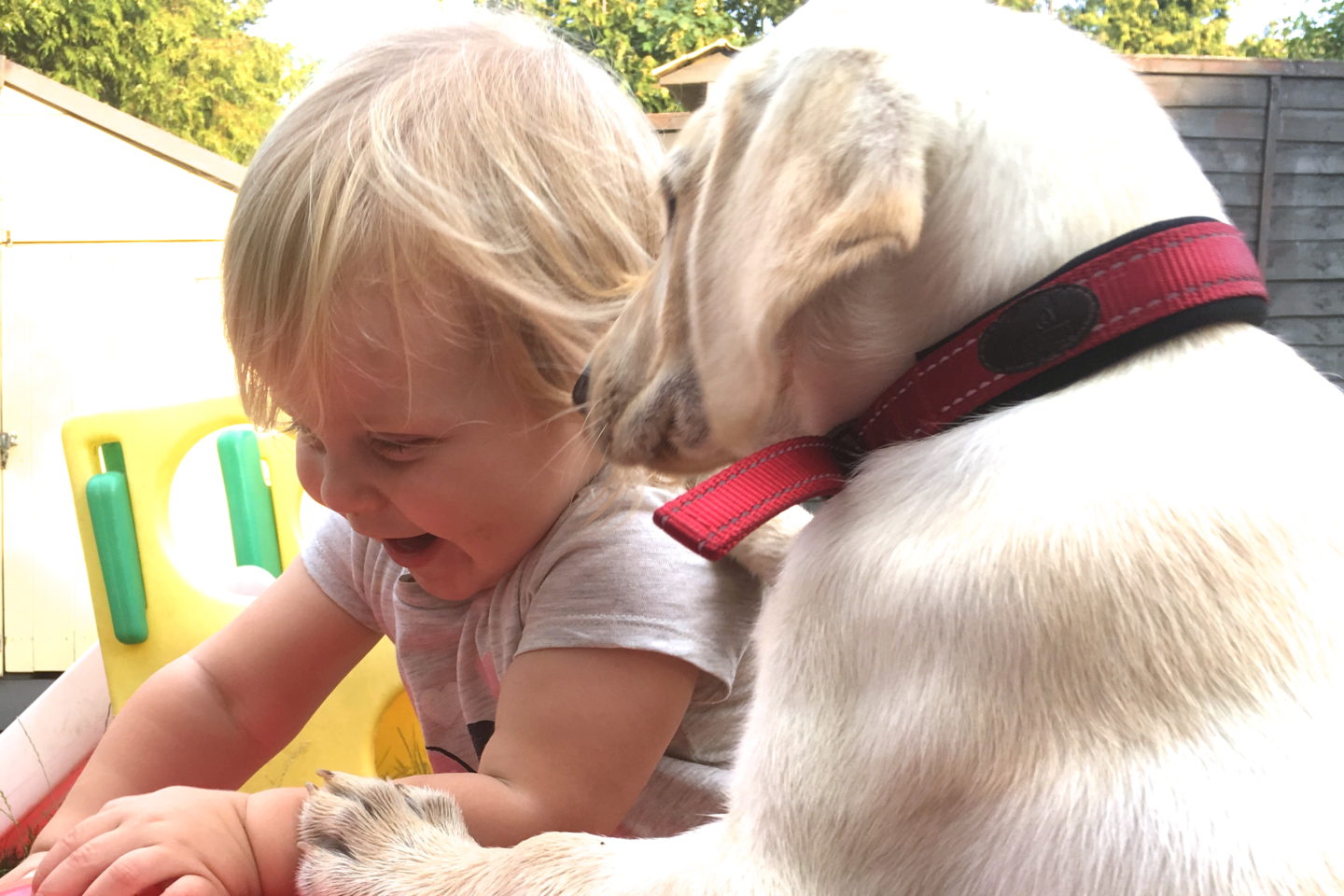 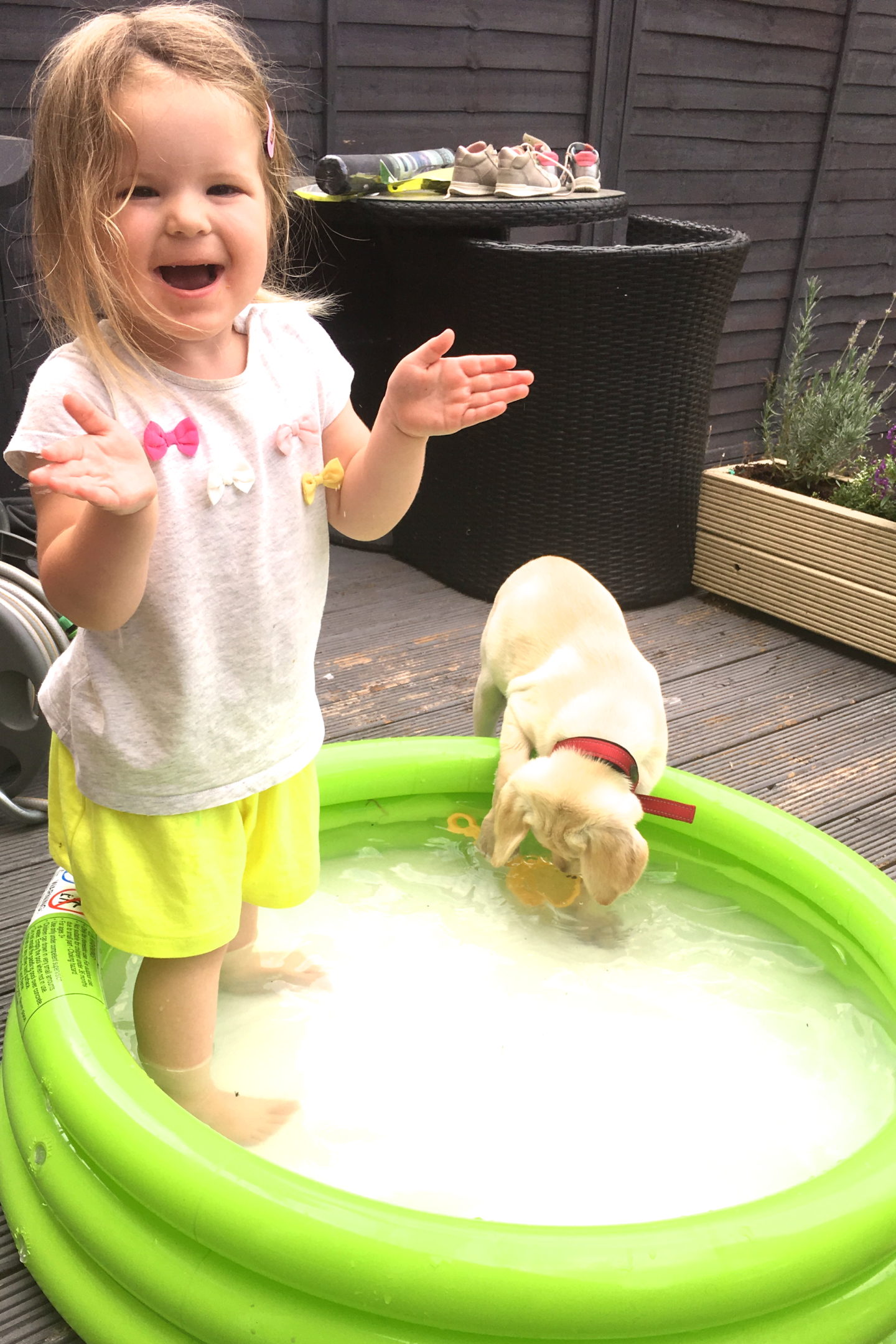 He’s far from boring though and he can have a mad half hour with the best of them. Shoes, particularly flip flops need to kept above nose level nowadays, and I’ve lost all the flowers from my plants already. He has that gorgeous playful puppy character and if he has something he shouldn’t, he runs off with a cheeky bounce in his stride.

Despite Gary’s reservations about getting a dog, one of my main reasons for wanting one, was for Lottie. Dogs are used widely for people with disabilities and there is evidence to show that they can help non-verbal children to speak. That for me was enough of a pro to wipe out all of the cons.

And anyway, there are lots of gadgets that can make life with a dog easier, so it’s also a great opportunity to shop! 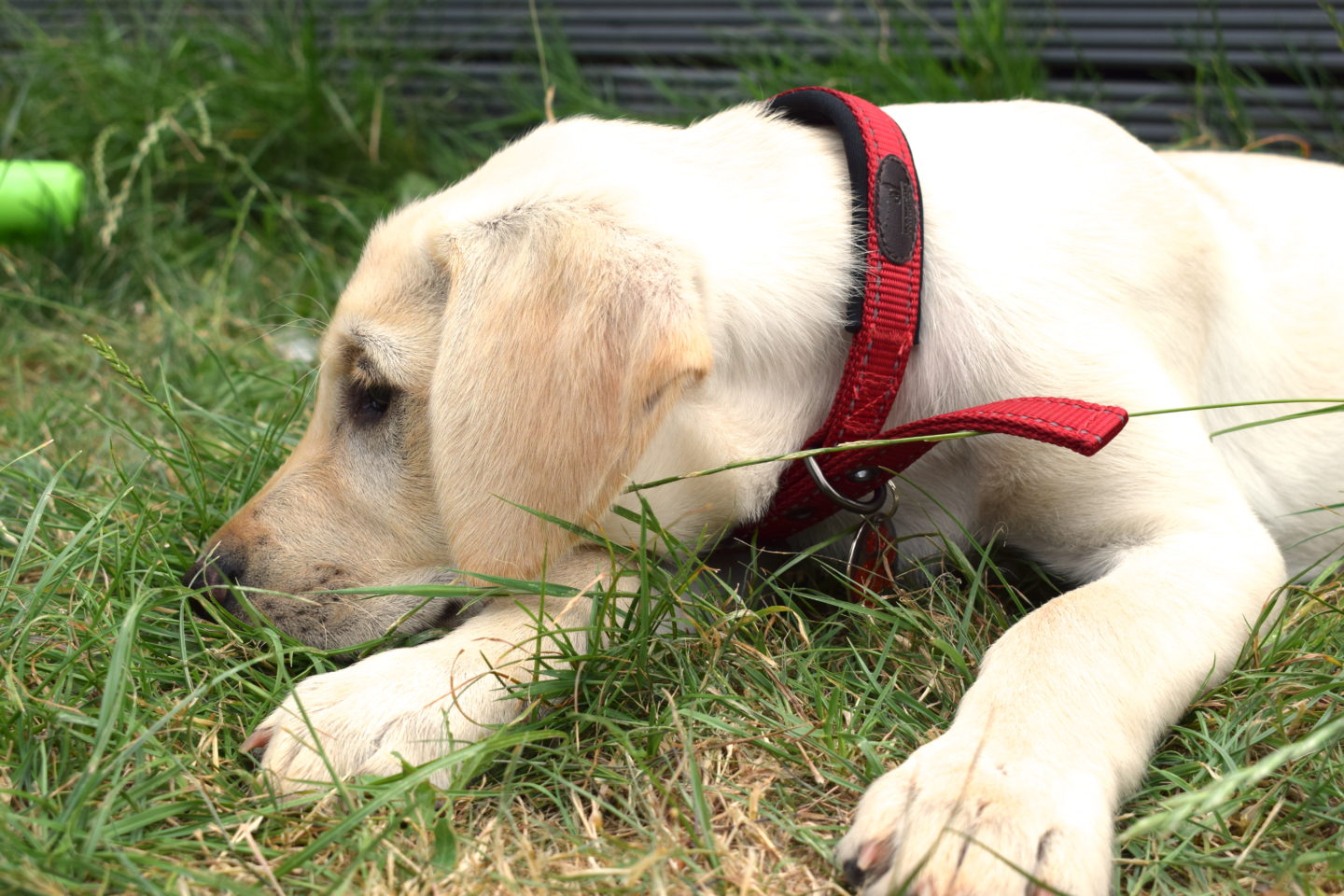 Already, in less than a week, Lottie is trying to say new words to and about Woody. She says Woo for Woody, and signs W in Makaton. She says god for dog (quite apt I think!), she says sit and good boy. It’s amazing and is melting my heart on a daily basis.

So far she is totally and utterly in love with this puppy. Wherever he is, she’s never far away. 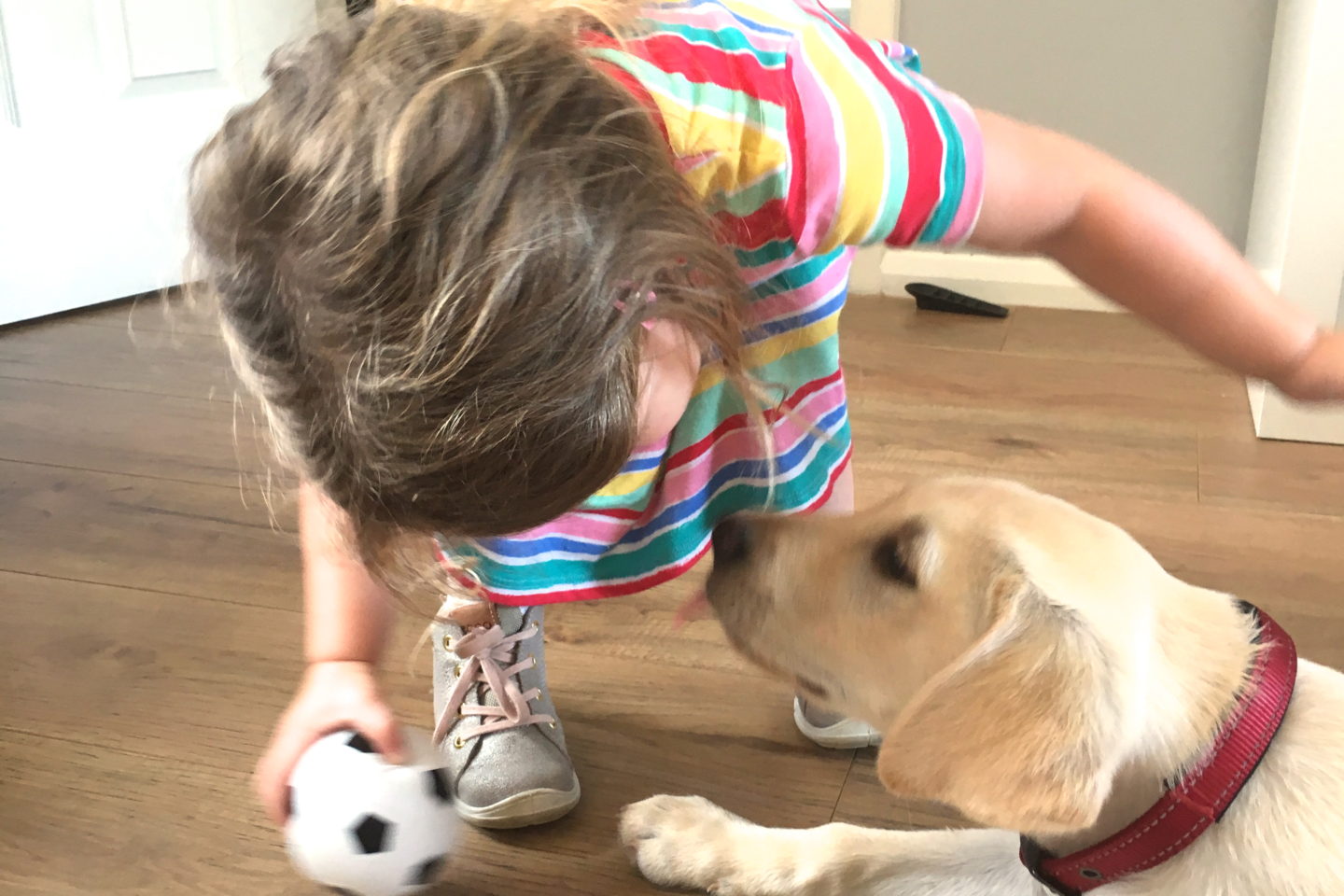 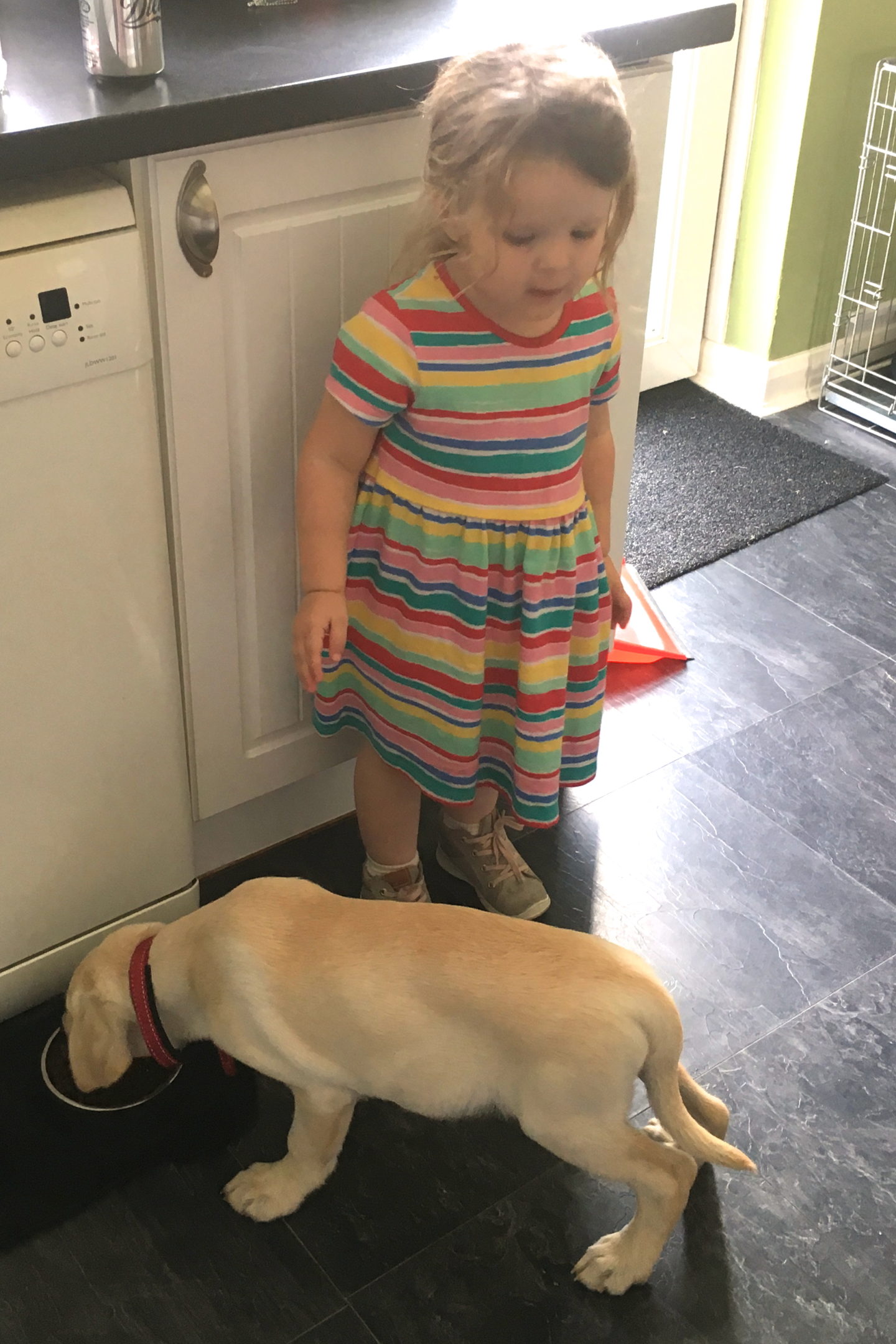 I’m going to try to take her with me to puppy classes to really get her involved with his training and hopefully that will help even more with speech. But even more than that, she has really grown in confidence already. She is patting him, cuddling him, laughing at him and just generally being really brave around him. 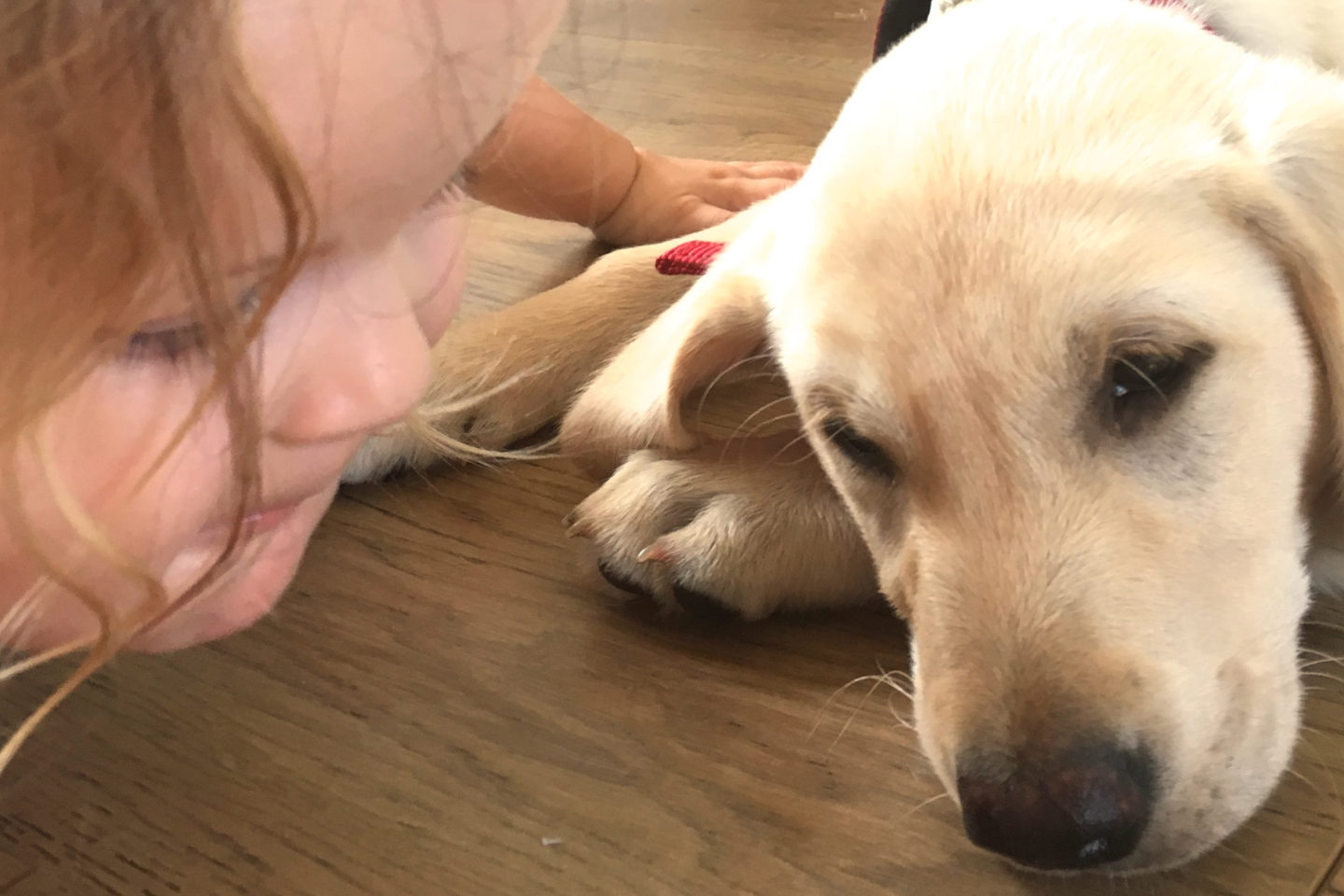 Her sister is just as delighted with our new member of the family. Frankie roars with laughter at pretty much everything Woody does. She bends down in front of him as soon as she sees him with her little hands on her knees, saying woof woof, woof woof. So cute. Both girls want to go downstairs immediately they wake up and are so excited to see him. 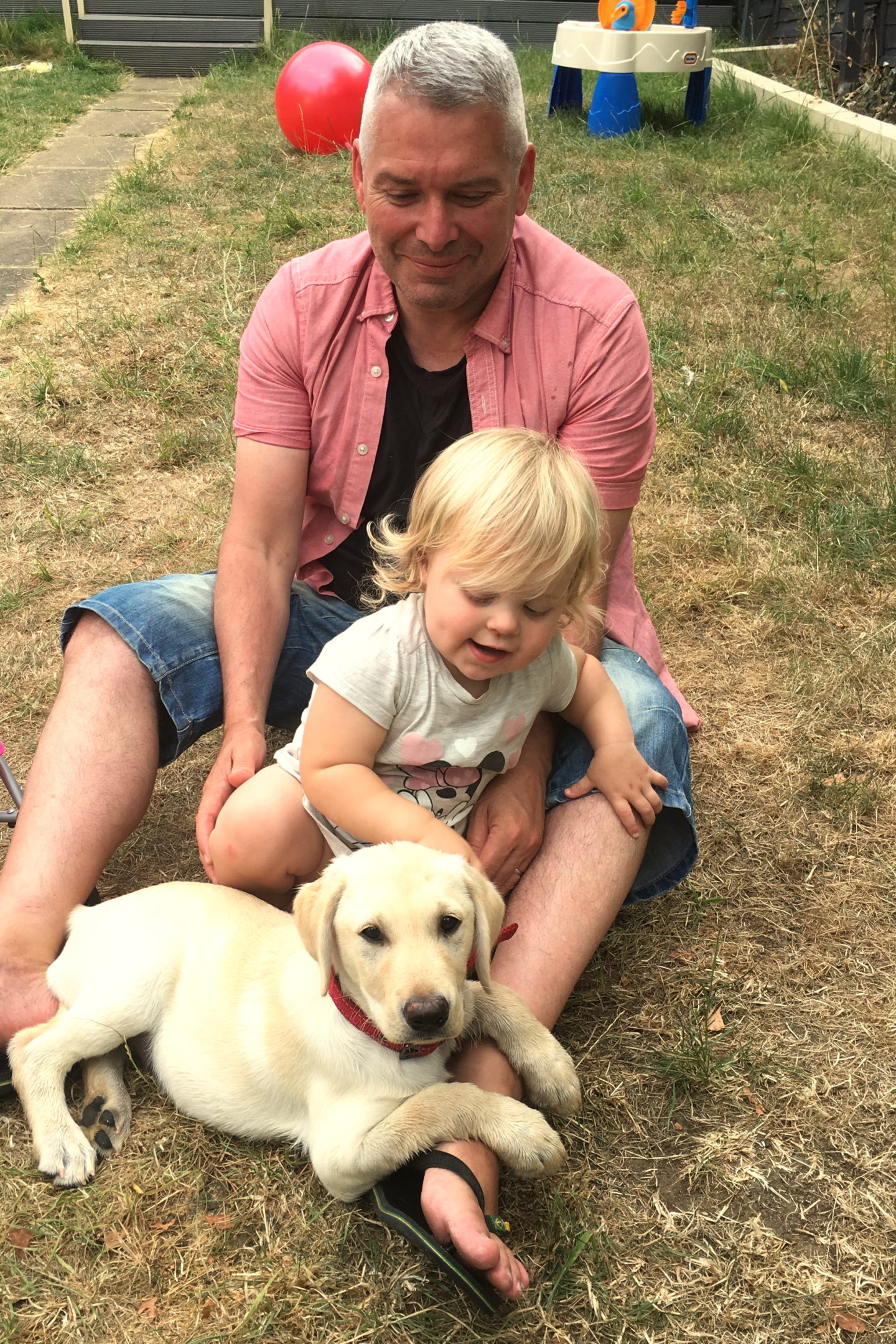 Since Woody has arrived, it’s felt like our family is complete. The girls have a new friend. I have a new companion. And we all have cuddles on tap with this big softie. Welcome to the family Woody dog. 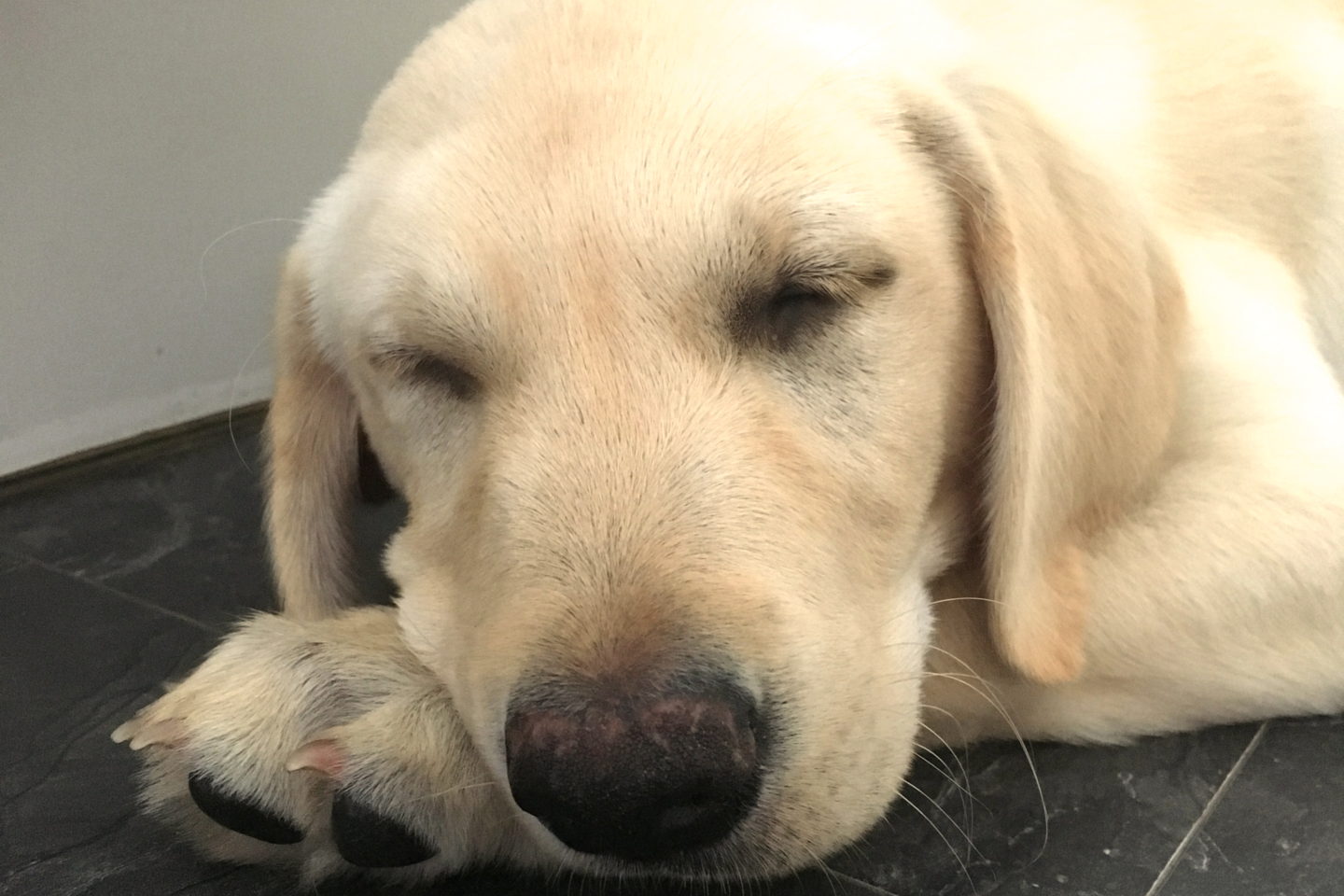 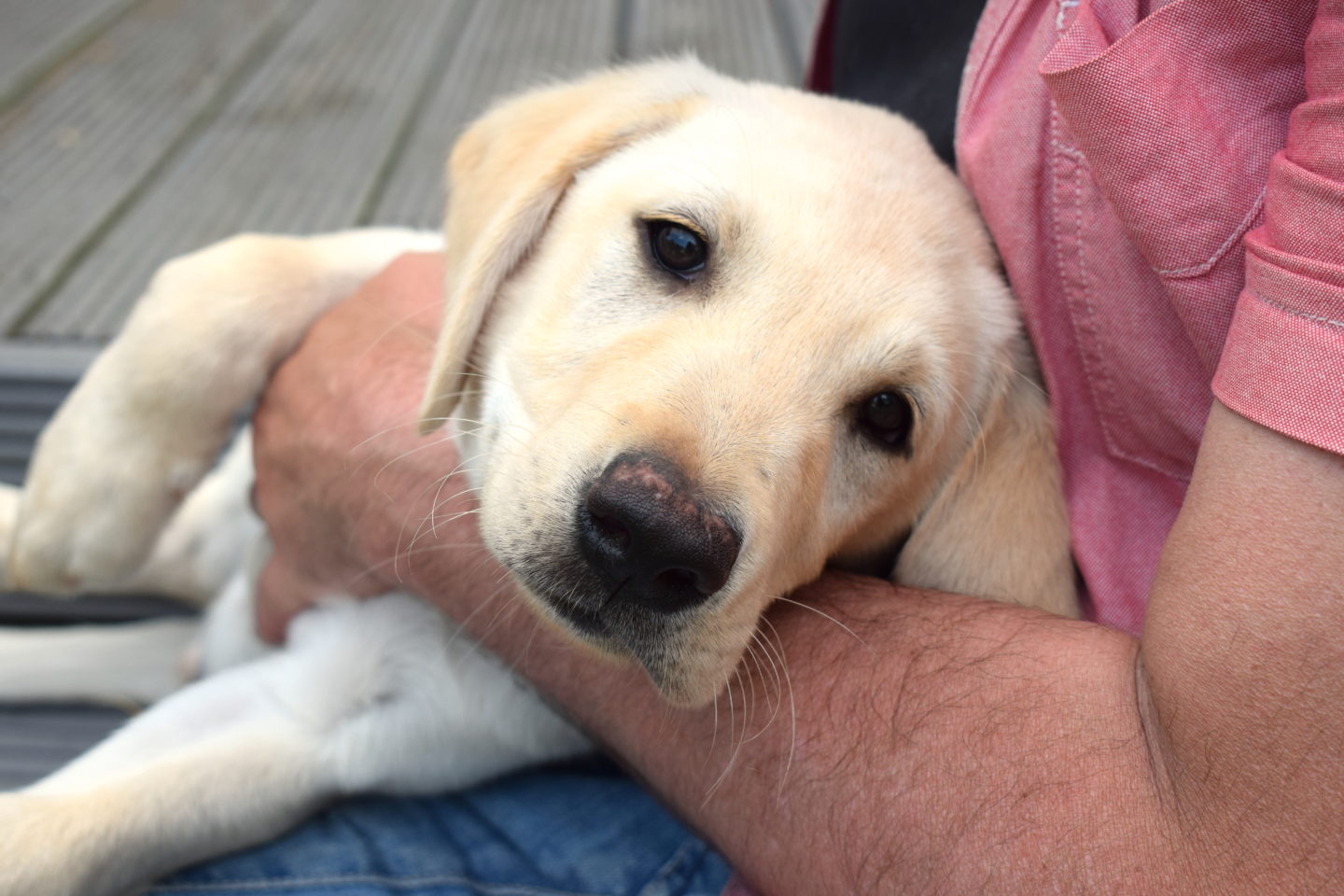 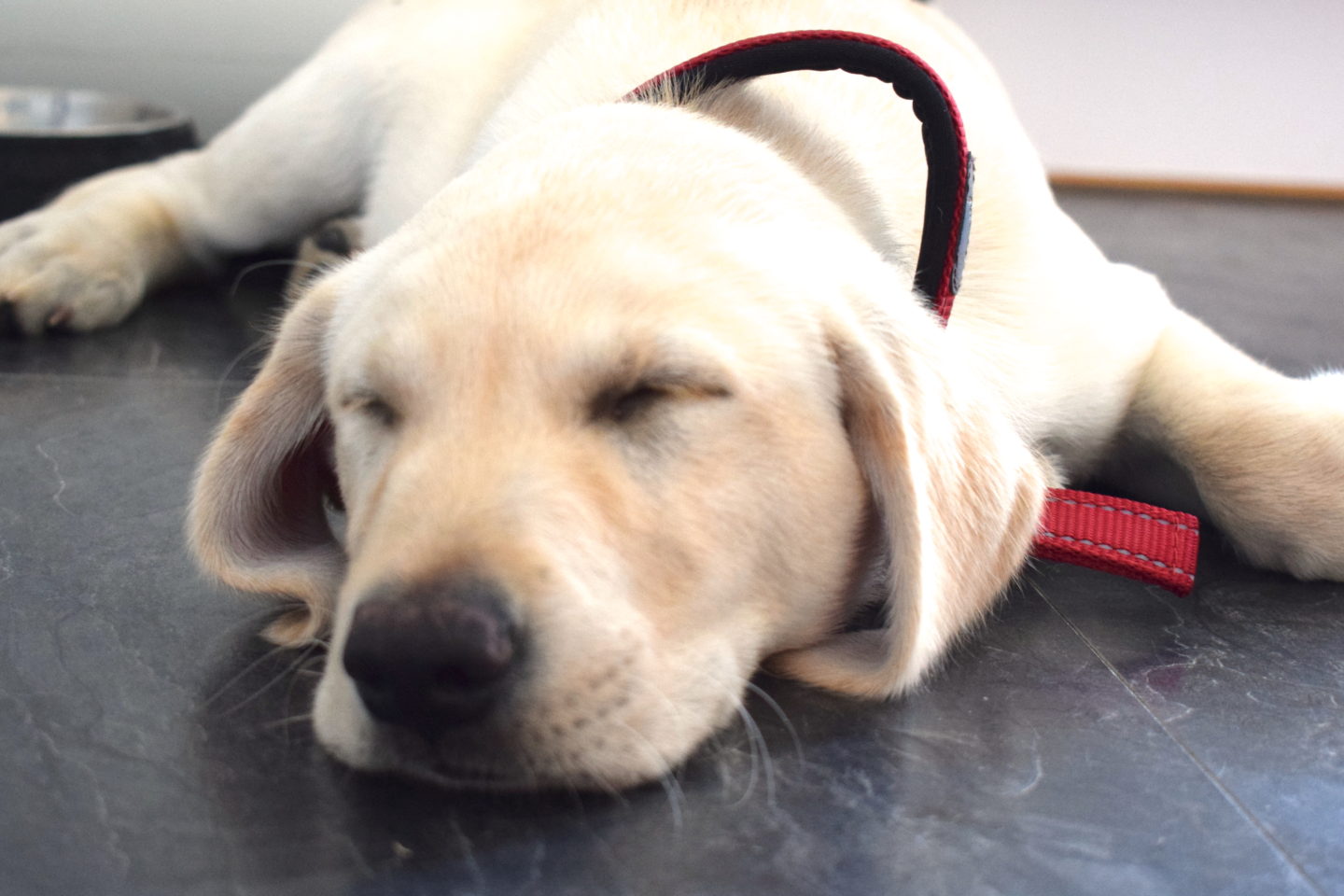 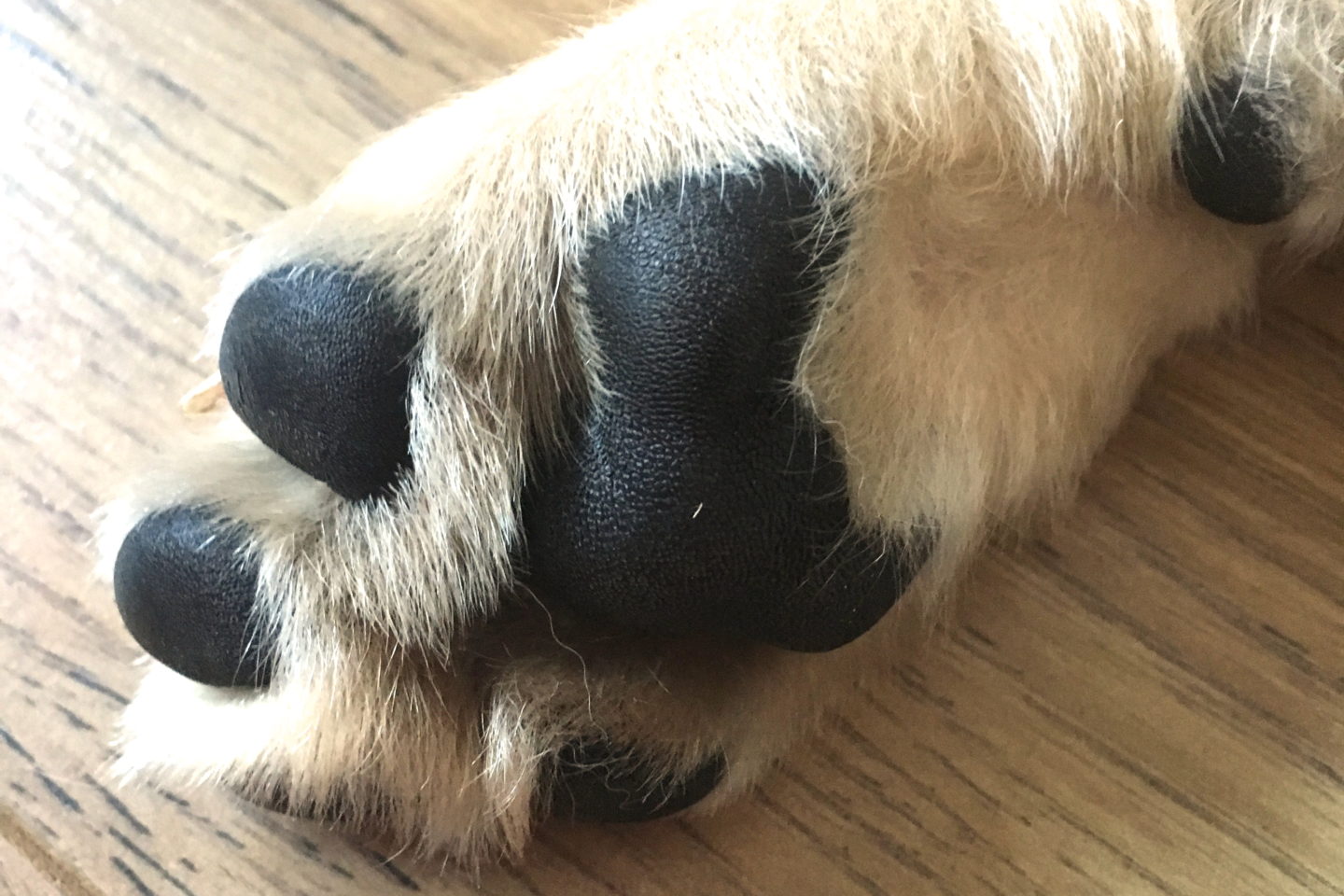