As readers of this blog will know, my eldest daughter has Global Developmental Delay. At two years, ten months, she is still largely non-verbal. She is around 12-18 months behind her peers in her overall development. Some areas are more advanced than others, but that’s where she sat as a ‘whole person’, when she was last assessed in January by the paediatrician.

She is also a summer born child, with a birthday in the middle of August (she was due on the 7th, but she’s her mother’s daughter and turned up very late). 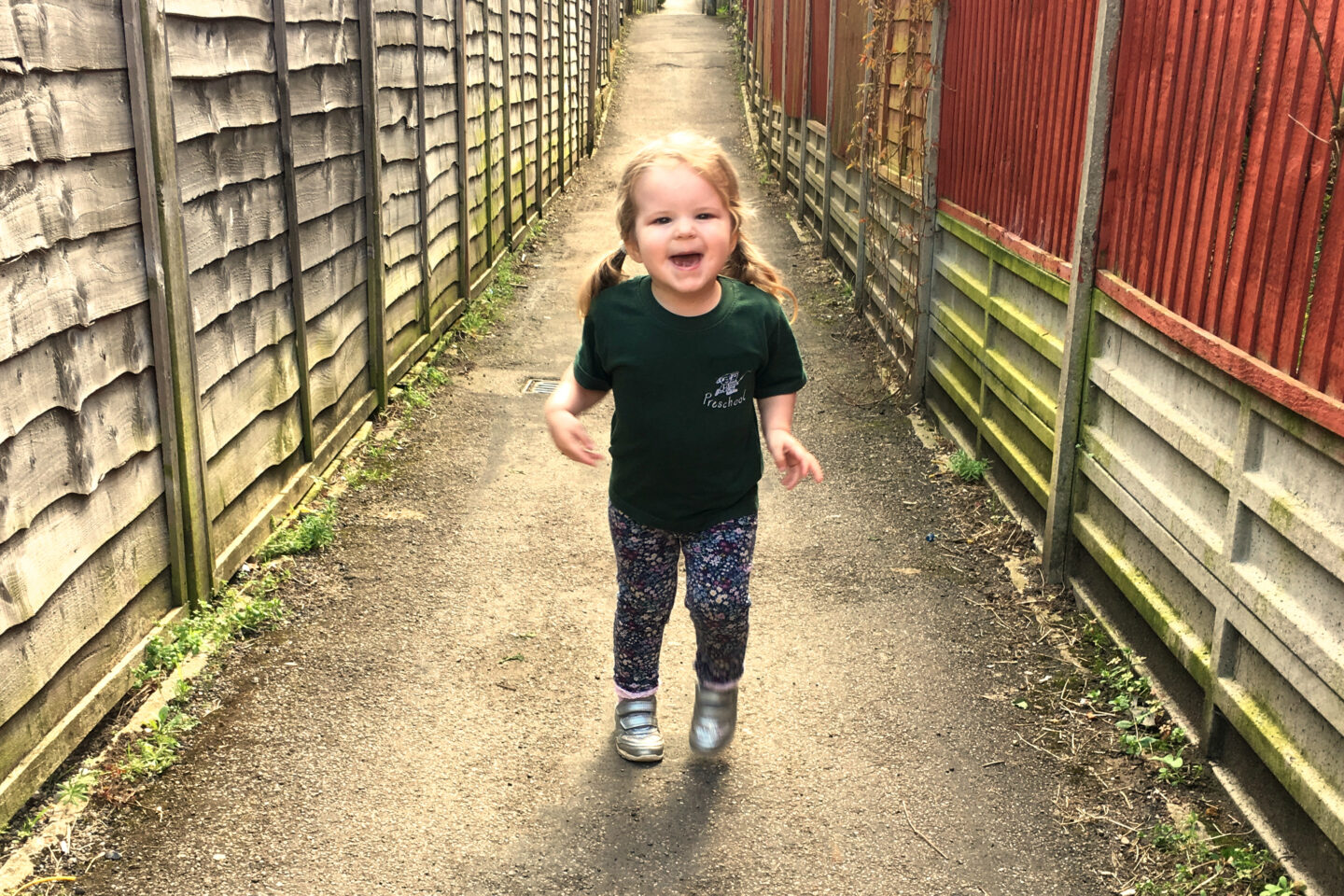 Lottie currently spends three mornings a week at our village preschool. Since she started there last September, she has come on leaps and bounds. The most noticeable improvement has been her social skills, and I just love to see her little friendships blossoming.

But as a parent you know if, overall, they are happy and Lottie is certainly that. She skips out of preschool every lunchtime, beaming and waving to everyone .

In our part of Hertfordshire, Lottie should move up to the nursery within the primary school the September after she turns three. So we duly applied for, and got, a place for her to start after the summer break.

And then I started to panic.

At nursery, she would have to go every morning at the least. There were less staff to children, and more focus on learning (albeit still through play).

More than that though, being a year behind developmentally would put her nearly two years behind the oldest children. At this age, that’s a huge gap. Two girls she has been friendly with will be nearly four when they start nursery. And while I think they will always be her friends, the gap between them developmentally is huge. In a social environment, that’s fine and I think it’s good as it pushes Lottie a bit to try new things and be a bit braver.

In an academic environment though, I was so worried it would knock her confidence if she couldn’t keep up with what others were doing. Lottie is a gentle soul and she’s quite cautious and nervous. She needs lots of confidence to try new things and if she’s not feeling confident, she’ll do her best to disappear into the background.

It also takes her a while to trust and open up to new people. Something she has done so well with her key worker and the preschool manager, and to a degree with all the staff there.

It had been mentioned that with the new rules in place, Lottie could defer school entry by a year. She would stay at preschool and start nursery and school a year later.

I panicked about that too.

Would other children pick up that she was in the ‘wrong’ year?

Would she miss the friends she’d made at preschool if they moved to nursery without her?

Perhaps I would actually be holding her back with her development by not moving her on.

It’s worth saying here that I’m the least decisive person in the world. Ever. I need to sit down and have a think if you ask me what I want in a sandwich. So making decisions about another human being’s education and life is not something I’m particularly good at.

I then had a meeting with her gorgeous key worker and equally lovely preschool manager. I asked them what they thought and we agreed that it would probably be best to keep her back and defer school entry by a year.

They sent me off to discuss with Gary. And he hit the nail on the head when he said that if she had been born two weeks later, we wouldn’t even be having the conversation.

It was decided. We will defer school entry.

And do you know what? It’s such a relief.

She’ll now be the oldest in her year and developmentally may be on a level with the younger ones.

She’ll spend another year with the preschool staff who are trained in her exact stage of development.

Another year in a really nurturing environment will, I’ve no doubt, bring her on even further.

More to the point, she feels safe there, so can grow her confidence more before she moves on.

She also has friends from both years at preschool, and is forming the most gorgeous friendship with a little boy in the year below who we walk home with and she’s known since she was tiny. So she does have friends in her new year already.

And another year gives us more chance to have a clearer idea of her needs. What support we will need to put in place at school. Whether she would in fact be better going to a specialist school. And that’s a whole new decision that I’m sure I will struggle to make, I’m sure, but there’s lots of advice out there, such as this post from Big Family Organised Chaos.

It gives her another year to master some more words and be able to tell the teachers what she needs. And it gives us another year to prepare her the best we can, as Kaiden Laverty is doing with his son, Joshua, who also has speech delay.

I’m now pretty sure that we’re doing the right thing in deciding to defer school entry for Lottie. But of course, I’m a parent, so a small bit of doubt still niggles.