When I was at primary school, our class made a tea towel depicting our future aspirations in life. We each had to draw what we wanted to be when we grew up.

Imagine the stick I got from the aspiring vets and astronauts when I drew a picture of myself holding the hands of two little people and wrote ‘I want to be a mummy’.

Having hugely enjoyed my university days, my career in journalism, PR and marketing, I’m now lucky enough to have realised my childhood dream and be able to work from home so that I can be mum and I don’t have to put my children into full time nursery to go out to work.

But there are some days, I just want to walk away. 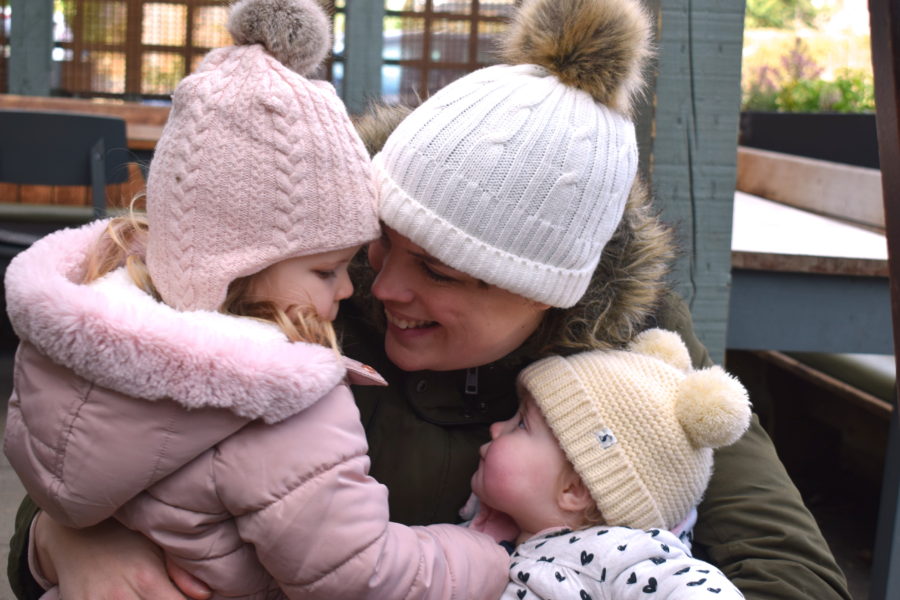 As I’m putting this out there on the big bad internet and there may be some people who don’t know me personally reading it, I feel I should first say that I adore my two girls. I would not change them for anything. I don’t regret for one moment having them. And I was right even when I was nine years old, motherhood is exactly what I was destined for. I know just how lucky I am to have two healthy happy children and to have conceived them fairly easily.

But some days, just sometimes, being mum is too overwhelming and I want it all to stop. I want to quietly close the front door behind me and walk away.

I don’t know where I’d go, mind you, but there is the odd occasion when just about anywhere would be preferable to my house.

I’d been up since 5.45am, shushing and rocking the baby back to a light sleep before heading out to look after Ben the horse. The day, as it always is with two young children, had been pretty non-stop since then. I’d changed about ten nappies, prepared four meals (the delights of an allergic baby and a fussy toddler, means nobody eats the same damn thing). Nothing new, but relentless nonetheless.

I had not had one minute to myself, without a small human in tow. Frankie had decided it wasn’t a day for sleep and simply wouldn’t be convinced otherwise. Point blank refusing any attempts at getting her to the land of nod. There was no amount of shushing, rocking, cheek stroking, milk, or anything else, that was even mildly likely to convince her otherwise.

But, of course (she’s 11 months old, FFS), she was exhausted. She’s not yet designed to be up all day. You know the whingey, whiney, clumsy, accident prone, cry if you look at her the wrong way, kind of tired? Yep, that.

And the whole time I was panicking inside. If she doesn’t sleep, I get no work done during the day. And that means a 14 hour day turns into a 16 hour day, as I have to start working when they go to sleep.

And of course, it’s currently colder than the antarctic outside, which is limiting when you have two children under three with insane amounts of energy. So the day thus far had been fraught to say the least. We’d tried to break up the day with a wander around the village, but that had quickly resulted in everyone (me included) getting freezing cold and miserable (snow is overrated). So we aborted mission and returned to our warm home.

By some stroke of incredible luck, Lottie had gone down for a nap after lunch, so at least I only had her little sister’s exhaustion to contend with. Lottie had earlier been in a fairly foul mood, equally whiney, joining in with Frankie and bored of everything within two minutes flat. But she was asleep. Small mercies.

So nothing terrible had happened. That’s the weird thing. There had been no disasters, nobody had hurt themselves. But it had already been a long week of rubbish weather, illness, teething, lack of sleep and generally getting behind with everything.

Then Lottie woke at 3.45pm and decided she needed to get up. Immediately. With no delay. So stood up and started rocking on her cot bars, which makes the most irritating noise known to mankind and drives me up the wall at the best of times. But yesterday, it was the thing that made me lose my shit.

I literally just saw red, stormed up the stairs, burst through the door and screamed at her to stop banging.

I then unceremoniously picked her up, stormed back down the stairs, put her down next to Frankie (still whinging) in the hallway and screamed at them both to stop. Stop whinging, stop whining, stop being brats and give it a rest, etc etc etc.

The shock on their faces was palpable. I never scream. I never lose my cool.

Of course, I tell them off, but they’re tiny in the grand scheme of things, and I don’t need to shout, I just need to be stern and explain why they can’t do something and Lottie at least usually listens and on the whole stops what she’s doing.

Frankie doesn’t, but she’s not yet one. Let’s hope she’ll grow out of it.

But all day, I’d been ignored. All day I’d tried my absolute best and been met with the whinge. And all day I’d had no break, no food, I don’t even think I’d had a drink.

And there it was.

One of those moments when I no  longer wanted to be mum. When I wanted to walk straight out of the front door and be a carefree 30-something who could be spontaneous and talk to other adults and go out whenever I liked.

Someone who could paint their toenails in the middle of the day. Who could go to the loo without a child staring at them or unravelling the toilet roll.

I wanted to be that person who spend 45 glorious minutes in the bath and then an hour getting ready to go out and have a meal and get tipsy, without having to worry about someone waking me up the next morning at 5.45am.

I wanted to be me for a while. I didn’t want to be anyone’s mum.

Instead I text my husband and told him that it was inhumane for anyone to be expected to work a 16 hour day with no break.

Then I did what all good mums do – I put CBeebies on for the girls and washed up noisily to calm down.

But before the water had even filled the sink, I began to feel horrifically guilty.

Their little faces when I went and sat down next to them to watch Waffle the Wonderdog were filled with joy. Instant forgiveness, and delight that mummy was back in the room and smiling.

They have no reason to think I would ever walk away. They have an unfaltering trust in me cater for their every need, that I will always be there for them. And I will. I wouldn’t give that up for the world.

But sometimes I really really do want them to stop whinging.

And sometimes I would love them to nap. Preferably at the same time.