I failed with the weekly pregnancy updates! I can’t say anything monumental happened to stop me blogging over the past few weeks, to be honest, I just needed a break. Mama got tired! I guess having an 18 month-old and being in the late stages of pregnancy will do that to a girl. 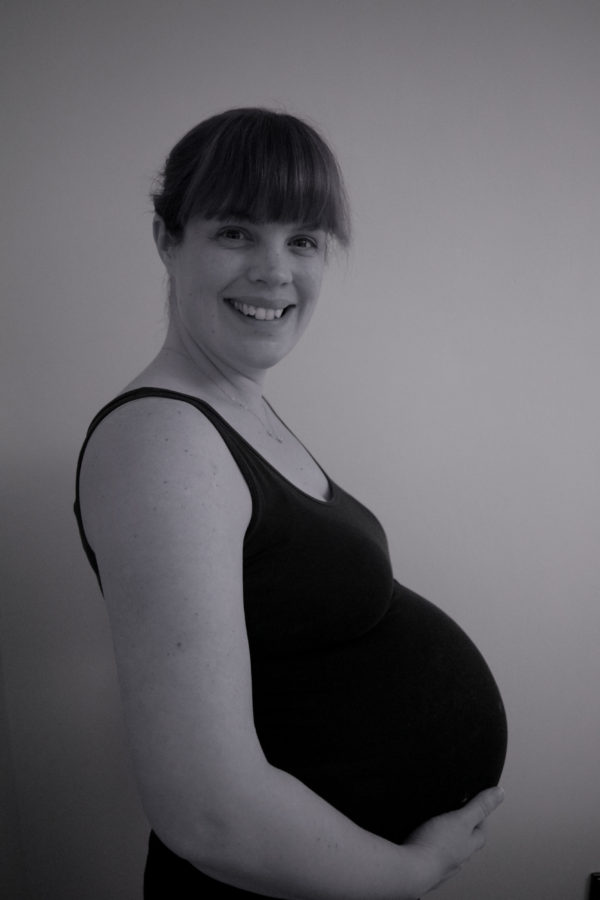 But despite slowing down a bit the last few weeks, Sunny still seems to be fine. I had my 36 week midwife appointment a few weeks back and the heart beat is still strong and regular, and my blood pressure, urine etc are all looking normal too. Bump was measuring 36.5cm at 35+6, which put it up onto the 90th centile and estimated to be weighing just over 3.1kg! That’s about a pound heavier than Lottie was at this stage… slightly scary.

Strangely, despite baby’s size, I don’t feel as though I’ve got that much bigger the last few weeks. Although, it’s definitely getting a little more cramped inside. I’m finding despite being hungry most of the time, I’ve not been able to eat huge amounts over the past week or so. If I do, I’m getting really bad indigestion and heartburn, so it’s better to eat little and often at this stage. That also seems to stave off the dizziness and seeing stars that was happening between meals.

But, it does look like baby has turned and isn’t back to back any more, which is a huge relief to me. I had got myself in a bit of a state about the possibility of going through another labour like Lottie’s was. I spoke to the midwife about my worries and she reassured me that there was nothing to say history would repeat itself and in fact, quite often, every labour is different. Here’s hoping this one is a bit more willing to come into the world than its sister was.

I’ve now finished work and am officially on maternity leave. I’m self employed and am lucky enough to work part time from home, so I have only had to be in the office of a client once a week for a few hours during this pregnancy, so I was really lucky. But the extra hours now that I’m on maternity leave are being well used for napping and nesting.

Symptom wise, I’ve continued to be pretty lucky. I’ve got mild pelvic girdle pain, which is causing a fair bit of aching and interfering with sleep, but I’m lucky enough that it doesn’t seem to be getting much worse and seems to be pretty mild. I do think it’s a bit of a warning from my body that I needed to slow down a bit, which is exactly what I’ve done the last few days and it seems to have worked. Mr M was off for the weekend so did all the heavy work with Lottie and I took full advantage of her nap times with a few of my own. This  gorgeous weather has also meant that Ben the horse is now staying out for a few nights, so I’m not having to muck out every morning, which is bliss!

My hands and feet are swelling towards the end of the day, but nowhere near as much as they did with Lottie. I wonder if that’s because I was heavily pregnant in summer with her, and the heat made things worse. My wedding and engagement rings have had to come off before they needed to be cut off! I feel really odd without them and I hope people aren’t wondering if Mr M and I are having problems!

Sunny continues to be an active little monkey and I’m feeling lots of movement all day. It gets particularly active at night and seems to be particularly comfortable sitting on my bladder and making me feel as though I constantly need a wee. It carries on having a party for an hour or so when I go to bed and then wakes up again about 5am. I’m hoping that won’t be its pattern when it comes out, but at least if it is, it seems to sleep between times.