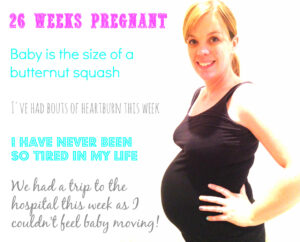 Feeling:I have quite honestly never felt so tired as I have this week (cue laughter from mums as they have been through the newborn stage! 😉 I’m sure it gets worse before it gets better, doesn’t it?) I had a bad night’s sleep on Sunday night due to heartburn, which has begun (yuck!) and being like a radiator with no thermostat, so Monday was a bad start to the week. Tuesday I felt slightly better and then Wednesday went downhill again. By Friday I felt like I was on my knees.

I think I must have looked as bad as I felt though, as work have said that I can start to work from home, as long as I am in the office a few times a week, which is a huge relief. I travel 50 miles a day, so cutting that out will really help.

Appointments: None as such, but we did end up at maternity triage on Friday night. In a nutshell (I’ll write more in another post), the baby had decided to hide behind my placenta, which meant I hadn’t felt movement for over 24 hours, which started a panic and ended us up in hospital until 1am. All is fine though and Little R-M is moving again now.

Looking: Bump has suddenly moved out the front, like a little football. Bending is beginning to prove difficult! And bags under the eyes are at an all time darkness.

Sleeping: Much better this week – I think the tiredness is overruling the heat/pit-stops/discomfort and I’m only waking once or twice the last few days – bliss!

Baby is the size of: A butternut squash