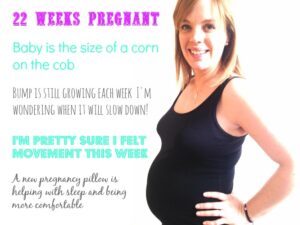 Feeling: This week has been fairly uneventful pregnancy-wise to be honest. We’ve had some financial stresses and strains, which have upset me more than they usually would, so the hormones are still in full swing, I think.

In terms of symptoms though, other than the usual aches and pains, I have been fairly OK this week.

I think I am starting to feel Little R-M moving around and having a wiggle, which is really reassuring. My 20-week scan showed that I have an anterior placenta, so this is likely to cushion a lot of the movement so that I don’t feel it as much, but there have been some definite pushes and shoves up by my ribs and down by my hips over the past few days, which is super exciting. I thought Mr M would be excited to feel this, but he can’t yet and I think the thought of it makes him feel a bit queasy… Men…

Appointments: None this week

Looking: Bump seems to be moving all out the front, so I feel like I’m looking more and more pregnant recently, especially in tighter fitting clothes.

Craving: I woke up on Monday with the greatest urge for cake. I’m not sure if this is a craving or if I was just being greedy, but either way, Mr M dutifully went out and got me some, bless him.

Sleeping: Quite a bit better this week, as I invested in a pregnancy pillow, which is easing the pain in my back and hips quite a bit, so I’m sleeping for longer with each burst and waking less, which is a big relief.

Baby is the size of: A corn on the cob.