We’re half way there already. This pregnancy has recently started to fly past. We have lots on with sorting out the house, saving like mad and preparing for our life as a family of three, so I guess it’s not a huge surprise that time is rushing past. 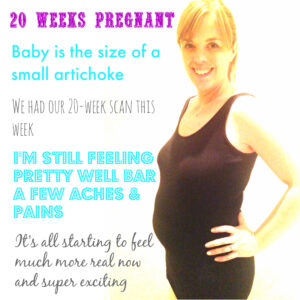 Feeling:  I’m feeling pretty well at the moment. The odd cramps are still present, but that’s pretty normal as my body grows to accomodate another human being, I suppose. If I’m asleep without moving much for a period of time, I get incredibly stiff. It’s like watching an 80-year-old get out of bed and get moving some mornings.

But in general, I’ve still got lots of energy and I can’t complain about pregnancy at the moment. I’ve been so lucky so far, I think I’ve said it before, but I really feel for ladies who have serious health issues during pregnancy.

Appointments: I had the cervical length scan this week. I know that the internal examinations will increase over the next months, and I realise that dignity is likely to become a bit of a distant memory now that I’m becoming mum, but an internal scan is horrible! It makes you feel uncomfortable, violated, and all I wanted to do when I got home was to curl  up and hide from the world. It doesn’t hurt, but it’s just not nice in a way I can’t really explain.

Anyway, the good news is, if you’re interested, that my cervix is currently 32mm. Average is 42mm at 20 weeks, but they don’t class you as being at risk unless you are 22mm or under. This is such a huge relief. I can’t tell you how worried I have been about going into preterm labour since I found out I was pregnant. And now some of that worry has lifted. I have to go back for another scan at 22 weeks (I can hardly wait) but so far, so good.

On Thursday, we had a much nicer appointment and went for our 20-week scan. Again, as it seems with most pregnancy related things, the excitement of seeing the baby again, was tinged with the normal parental worry that they would find something wrong. We took my mum along with us as when we were telling her about the 12-week scan, she couldn’t believe how much we could see and how detailed the scans were. I’m the youngest of three, so when she had pregnancy scans, they were very vague and didn’t show much detail at all. She absolutely loved coming to see her grandchild and was in awe. I’m so pleased we took her along and she could share such a special time with us.

Anyway, back to the scan. Mr M and I went in first and having said we didn’t want to know the gender, we saw the four chambers of Little R-M’s heart, the bladder, the kidneys, the face, the hands and the feet. And so far all was looking fine. Dominic, the sonologist, then asked us to go for a walk for 10-15 minutes to try and move Little R-M as there were some more measurements that he couldn’t make. We were quite used to this as Little was fairly uncooperative at the 12-week scan too. So off we went. Mr M was really quiet and a bit stern and I could tell he was a bit worried. 10 minutes is actually a long time to wander around a hospital, but we did, and when we got back, we sat and waited to be called back in.

The 15-minute mark passed, then the 20 minute mark. Mr M was getting more and more quiet and worried looking. Eventually after half an hour, with both of us convinced that something was wrong, we were called back in. Mr M sat with a ramrod straight back, looking a bit grey. (My mum was blissfully unaware and thought I was just being impatient) The scan continued and Dominic eventually managed to get the leg measurement he needed. In the meantime, another staff member came into the room, who was introduced as Dominic’s ‘colleague’, thus heightening the panic. After one of the longest 10 minutes of my life, with my mum gazing at the parts of Little R-M, Dominic finally turned to us and told us all was fine, Little is falling on the average line on every measurement and congratulated us.

The relief is like nothing I have ever felt before. The whole experience was a bit of a rollercoaster (cliche I know) and left me emotionally exhausted. I simply cannot imagine how people get through that scan if they find out something is wrong – it must be just heartbreaking and my heart truly goes out to them. 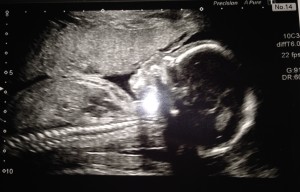 Looking: I think I look much the same again this week, although my tummy is starting to feel tighter now, so I think the skin is stretching. I went to pregnancy yoga for the first time this week and felt a bit of a fraud, as everyone was so much bigger than me.

Craving: Still constantly thirsty and still can’t bear the thought of cherry tomatoes, but other than that, eating patterns are fairly normal at the moment.

Sleeping: Still pretty good, other than the normal wee-breaks every couple of hours.

Baby is the size of: A small artichoke.